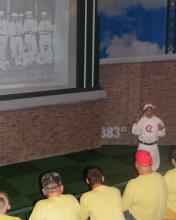 My favorite Opening Day memory …It's so difficult to pick just one. I've been very fortunate to have been able to attend each Opening Day (save one) since 1984. I guess that first Opener would have to be at the top of my list. My uncle purchased tickets and took me and my cousin. It was the first opener for both of us. I was twelve and he was thirteen and neither one of us had ever been to the Stadium when it was so full of both people and excitement.

The tickets were in the red reserve section and afforded us a wonderful view of the field. The Reds made a number of changes that off-season but the most important to me was the signing of Dave Parker. I was sure that Parker was going to return to the form he displayed for most of his career with the Pirates when he was one of the best players in the game. The Parker signing epitomized what Opening Day is all about: Unbridled optimism.

My optimism seemed to be confirmed as the game unfolded. Parker had two hits and drove in two runs and Eddie Milner (long a favorite player of mine) hit a home run and was robbed of another. Mario Soto was his typical dominant self, allowing only one run in a complete game, seven-hitter. The final was Reds 8, Mets 1 and it could not have been any more perfect.

After that first Opening day, a tradition settled in that began with the mad scramble to secure tickets. Once tickets were in hand, the countdown began. On the day of the game, a group of us would work out the logistics of transportation and parking and, most importantly, where we would gather before the game to toast the start of the season. Nicholson's was a favorite but Price Hill Chili was always in the running.

In recent years, things have changed a bit. Working for the Reds Hall of Fame, Opening Day continues to be a day of great celebration but it is also now a day of work. All of the off-season preparations are pointed to that one day. Around here, everyone's mantra is the same …"It has to be finished by Opening Day." Once the day finally arrives, all of the work that went into getting ready for it is put to the test. In the end, even if everything isn't perfect and doesn't go exactly as planned, you find yourself feeling like its OK. After all, whatever bumps are encountered on this most special of days are overshadowed by the joyous reality that baseball is finally back and with it comes the optimism that only it can generate.

Born and raised on Cincinnati's West Side, Chris Eckes has been a Reds fan since he attended his first Reds game in 1978 at the age of six. Chris graduated summa cum laude with a degree in history from the College of Mount St. Joseph in 2000. He interned at the Andrew Jergens Company for a year assisting in the establishment of the company's corporate archive. Concurrent to attending school, Chris worked as a manager in the Visitor Services department at the Cincinnati Museum Center where he was employed from 1996-2004. Hired one month before the opening of the Cincinnati Reds Hall of Fame and Museum in August of 2004, Chris established the museum's Visitor Services department. Over the years his responsibilities have expanded to include daily management of all museum operations, oversight and care of the museum's artifact collection and the design of museum exhibits including "Edd Roush and the 1919 World Series" and PETE: The Exhibit, which explored the playing career of baseball's all-time hit leader, Pete Rose.